Get in touch
Search
HomeStoriesMichelle's story

A brave story of anxiety during pregnancy and reaching out for help. 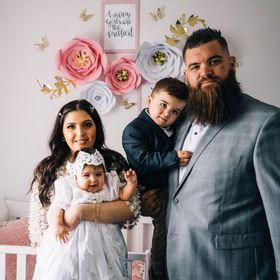 This photo was taken at my daughter Lavina’s baptism. I looked like the picture-perfect mother, but truth be told, behind that smile I was experiencing one of my darkest days. I woke up at 2am that morning with a raging fear that I was going to die that day. My mind started racing, my heart was pounding and I started to envision my death.

I had an early appointment to get my makeup done, so I eventually got up and had a shower. I kissed my husband and seven-month-old baby goodbye. I looked at my two-and-a-half-year-old son Jace in the baby monitor and said “Mummy loves you”,and then I left with the thought that I would never see my family again.

My mind was of course wrong; I managed to get through the day with hidden tears, multiple panic attacks, mind wandering, fake smiles and lies to cover how I was really feeling.

“This behaviour had sadly consumed my daily life for four long months.”

I was exhausted, broken and desperate for it all to end, because I couldn’t live in constant fear anymore.

When I had Jace two years earlier, I suffered from a mild form of anxiety. I put that down to being a new mum and having no clue what I was doing, but this time was so different. It all started during my pregnancy with Lavina. I suffered from all-day morning sickness for four months, Jace was giving me every illness possible from childcare, I was already suffering from pelvic girdle pain and was having difficulty walking. I was so over being pregnant and I was only in my second trimester.

On top of all this, I also started to experience negative situations in my personal life and the stress from that conflict started to take a toll on my body. I felt dizzy all the time, my nausea came back and I could constantly feel my heart pounding. I began to worry that something was wrong with my heart and that it would cause me and my baby to die during childbirth. My obstetrician referred meto a heart specialist to have my heart monitored. After getting the all-clear physically, they believed I was suffering from anxiety. I started to see the same psychologist that I had seen when I had Jace.

“By working with her, I was able to prepare myself mentally to give birth.”

When Lavina was born, I pulled her out and put her onto my chest, but she didn’t make a sound and was blue. After a few seconds, which felt like an eternity, she beganto cry. Instead of feeling joy, I felt absolutely nothing: I just stared at her, I was completely numb. The guilt of that feeling still haunts me and I don’t know if it will ever go away.

It took me a few days to start to bond with her. By the time I got home, I was completely in love with her. I was so happy my pregnancy was over and we were both alive and healthy. For the next three months I was juggling everything so easily, I was like Super Mum. Jace was adjusting very well and Lavina was an absolute dream baby. One night, after being put in a situation where I was reminded way too much of painful times during my pregnancy, I broke down screaming and crying because of the thought that Lavina might not have survived and I never would have been her mum. This was the beginning of my downward spiral into darkness.

For four long months, I become this person who I didn’t recognise. I felt I was losing my mind. I would start my day dry-retching or vomiting because I was petrified. My day would then continue with multiple panic attacks. I didn’t eat, I was fixated on death, I didn’t want to touch my children, I disconnected with loved ones,my mind was foggy, I couldn’t cope with daily tasks and I would cry all day.

I had so many triggers that would set me off and put me in a state of terror. My husband began to stay home from work because he and my family didn’t want me to be alone. I was so terrified of being alive, and of dying, that I would sleep as much as I could to escape my reality.

I was still seeing my psychologist from my pregnancy and after explaining to her what had started happening, I asked if I should be on medication. She gave me a few tasks which she believed would help instead. I woke up oneday and felt instantly better. I decided thatI didn’t need to see my psychologist for another six weeks. This was a huge mistake. After only a few weeks of feeling like myself again, I spiralled back out of control. I visited multiple doctors and got blood tests to check if I had a physical imbalance somewhere, but they were telling me that I was fine and it was a reaction to stress.

After experiencing one of my worse panic attacks, I thought I wasreally going to die this time. My husband wanted to call an ambulance, but I was scared that they would hospitalise me and take my kids away from me.

“So instead, I called a helpline.”

They told me that they believed I was experiencing postnatal depression and anxiety. The helpline counsellor gave me helpful breathing strategies and advised me to go back to the doctors and get a referral to a perinatal psychologist. She also said that in the meantime, I shouldcontact the PANDA Helpline if need be.

“A few days later I ended up calling PANDA and it was the best decision I have ever made.”

They were fantastic. They told me to go straight to the doctors and to start medication immediately. They sent me an email of everything we discussed on the phone, so that I could show the doctor. I started to see a perinatal psychologist and after working with her, everything I had experienced all started to make sense. It only took a week on medicationfor me to notice a difference and within weeks I was feeling great.

Now ten months on, I still find it difficult to look at Lavina’s baptism photos. I can see the pain in my eyes.

“It took along time to be able to look at my daughter and not feel guilty that I had failed her as a mother.”

I still have flashbacks if something triggers me,but I am now able to smile as I see how far I have come. Even though I am still me, I am a different version of me. I have a new lease on life and I now refuse to engage in any negative behaviour that will affect my mental health. I am currently completing a Bachelor of Psychological Science with the goal of becoming a Perinatal and Infancy Psychologist, so that I can help families who are suffering during this time.

“With the combined support of my amazing husband, my family, my friends, my perinatal psychologist and PANDA, I was able to get mentally healthy again and live my life.”

Coping with strong emotions as a new parent

Find someone to talk to, Monday to Saturday.

Talk with friends or family

Consider talking about how you are feeling with someone you trust. This might be a friend or family member. Once you starting talking you might be surprised at how many others have had similar experiences and the support they can provide you.

Talk with your doctor

Talking with your doctor can be an important step to getting the help you need. They should be able to give you non-judgemental support, assessment, diagnosis, and ongoing care and treatment. They can also refer you to specialists such as a counsellor, psychologist or psychiatrist.

If you are having suicidal thoughts or are feeling disorientated it’s important to get help immediately. PANDA is not a crisis service, if you need immediate support call Lifeline 13 11 14 (24/7).

How are you going?

Everyone’s experience of pregnancy, birth and parenting is unique and brings different rewards and challenges. Our mental health checklist can help you to see if what you’re experiencing or observing in a loved one could be reason to seek help.

Coping with strong emotions as a new parent

How are you going?

Everyone’s experience of pregnancy, birth and parenting is unique and brings different rewards and challenges. Our mental health checklist can help you to see if what you’re experiencing or observing in a loved one could be a reason to seek help.